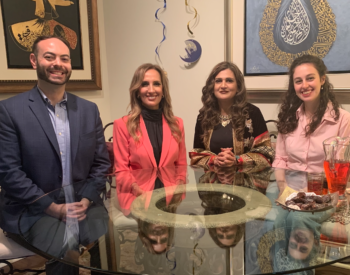 Iftar is the meal Muslims around the world have to break their fast during Ramadan. Ramadan is a time of peace a reflection, a time to open our hearts to people from different faiths. Watch our Muslim-Jewish Interfaith Iftar here to hear from faith leaders from different backgrounds as well as honorable members of Congress.

Click here to read about our Iftar in the press! 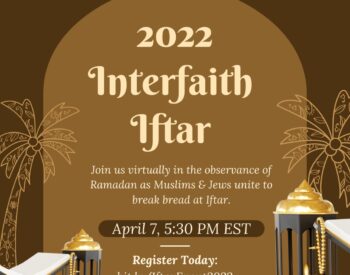 The Iftar is yet again a show of solidarity between Muslims, Jews, and all people coming together to break bread in the holy month of Ramadan. 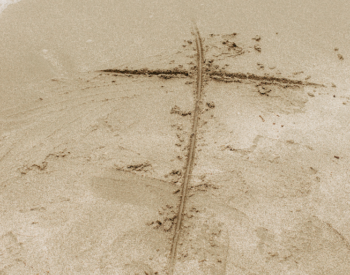 Anila Ali, Chair of the Pakistan IRF Roundtable, vehemently condemned the attack on the Christian clerics in Peshawar on Sunday, January 31st, 2022.

“As a Pakistani American, I am very concerned at the escalation of violence against Christians in Pakistan. Pakistanis have a constitutional right to practice their religion freely and Christians should never have to feel unsafe when going to pray at a church. I know how important religious freedom is to Muslim Americas- – it allows us to practice our religion freely,” said Anila Ali.

Pakistan IRF Roundtable Chair, demanded the Pakistan government to provide more security to the Christian communities and their houses of worship.

“An attack on the Christian community should be seen as an attack on all of Pakistan.

Ali added: “We urge the Government of Pakistan and Prime Minister Imran Khan to do more to protect the Christian community. Religious persecution is on the rise in Pakistan, and it is of grave concern to us. This heinous attack and killing require an urgent reckoning with Islamic extremism as the enemy within.”

We send prayers to the grieving family of Pastor William Siraj and assure the Pakistani Christian community of our support. 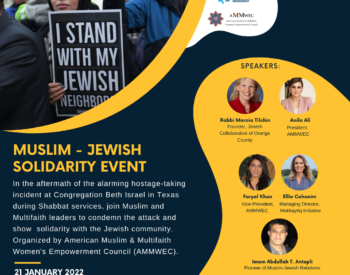 AMMWEC hosted a virtual call with faith leaders throughout the United States of America to express solidarity with the Jewish community after the terrorist attack on Beth Israel Congregation in Colleyville, Texas. AMMWEC President, Anila Ali, And the entire Board consisting of Multifaith women expressed their solidarity with the Jewish community. Call participants included Mahomed Khan, Rabbi Yaakov Menken from the International Religious Freedom Roundtable, Rabbi David Lustig of the Washington Hebrew Congregation, and representatives from the Anti-defamation League of Orange County, the Jewish Collaborative of Orange County, Kesher Israel: The Georgetown Synagogue, Hadassah, DC Interfaith Council, the Nation’s Mosque, and the Greek Orthodox Archdiocese of America. 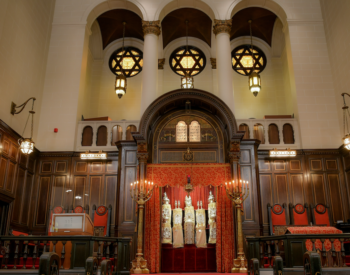 “We are relieved that the crisis at the synagogue ended with all hostages safe, and we are devastated that once again a Jewish house of worship has been attacked. Jews everywhere deserve to live in safety – and Muslim community leaders must step up to help ensure these attacks stop.

“We appreciate Jewish community leaders who have urged that the synagogue attack should not spark a counter-reaction of Islamophobia. The answer to hate is never hate.

“At the same time, silence is complicity – and we cannot stay silent about a climate of antisemitism tolerated by some Muslim leaders. Just as the Tree of Life Synagogue attack forced American society to confront far-right antisemitism, the Congregation Beth Israel attack requires an honest reckoning with demonization promoted by Islamist extremists.”

“We sadly do not need to look far for examples. Just weeks ago, Zahra Billoo, a leader of CAIR, used a speech at a Muslim community event to attack mainstream American Jews, saying:”

“We need to pay attention to the Zionist synagogues. We need to pay attention to the Hillel chapters on our campuses just because they’re your friend today doesn’t mean that they have your back when it comes to human rights. So, oppose the vehement fascists, but oppose the polite Zionists too. They are not your friends… I’m not going to sugarcoat that they are your enemies. There are organizations and infrastructures out there that are working to harm you. Make no mistake of it: they would sell you down the line if they could. And they very often do behind your back. I mean the Zionist organizations. I mean the foreign policy organizations who say they’re not Zionists but want a two-state solution.”

“Labeling mainstream Jews as ‘enemies’ exacerbates inter-communal strife and creates the conditions for violence. Muslim leaders must insist upon zero tolerance for antisemitism otherwise, we betray our moral and religious duties. The Jewish people are wonderful allies of Muslims. Shalom and Salaam!”