Interfaith Iftar at the Diyanet Center of America 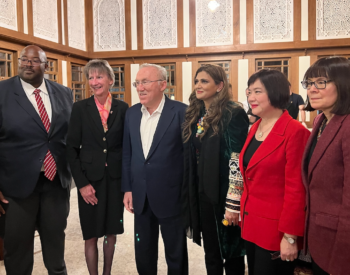 AMMWEC hosts inter-religious Iftar at the Diyanet Center for America.

People of many faiths gather to honor the spirit of interfaith and Ramadan. The American Muslim & Multifaith Women’s Empowerment Council (AMMWEC) joined hands with the Ambassador of the Republic of Turkey, H.E. Murat Mercan, to bring together an interreligious iftar at the Diyanat Center of America. This beautiful mosque and community center serves free of cost iftar to almost 800 people every day of Ramadan.

Anila Ali, president, and co-founder of AMMWEC welcomed the guests along with Ambassador Mercan and his wife. Muslims, Jews, Christians, Sikhs, Hindus, and Bahais, sat together to honor the spirit of Ramadan.

Rabbis, imams, pastors, and priests sat with each other to listen to the hosts.

Anila Ali kicked off the event, “As Muslims, it is our duty to give rights and respect to all human beings- we call that huqqoq ul ibad-.

The Holy Quran says, “We have created you from a single pair of souls and made you into nations and tribes that you may know each other”. So by doing Interfaith, we are getting to know each other.

Ali went on to explain the goals of AMMWEC, “We founded AMMWEC to counter hate and bigotry, extremism by empowering those on the front lines: which is women. Women can play a powerful role in peacemaking by highlighting the importance of human dignity- human rights- in Islam we call that Huqooq ul Ibad; this is very dear to Allah. Bringing women to the forefront of peacemaking and bridge building requires strategic coordination with government, civil society, and faith communities so that they can be at the table and not on the menu, so that they can use their voices to help negotiate a better future for our children. That’s what we do at AMMWEC.”

In his welcome address to the audience, the Ambassador said: “This is the time that we need mutual understanding, co-existence, being able to get together despite differences.” He commended the AMMWEC leader, Anila Ali, a Pakistani origin woman for accomplishing and executing programs such as this. He brought attention to the plight of refugees, with the war raging in the Ukrainian crisis. He emphasized that Turkey is host to the largest number of Syrian refugees, and he reminded the audience that more than 58,000 Ukrainians have also arrived in Turkey to seek refuge.

Imam Talib Shareef, of Masjid Muhammad in Washington DC, began with the greetings of peace, salam alaykum. He recalled traveling to Turkey and seeing tributes to the first black Muslim, Bilal, a black slave who was freed by the Prophet Muhammad PBUH and asked to recite the first call to prayer. He reminded the gathering that Ramadan was the ninth month of the Islamic year and a child stays in the mother’s womb for nine months. Ramadan is divided into three parts; the first part is Rahmat, mercy and compassion, the second is forgiveness and the third is freedom from sin.”

The closing prayers were rendered by Dr. Bilal Kuspinar, the director of the Diyanat Center. After the iftar, the guests experienced the Muslim prayers and joined the hundreds of families saying their prayers, eating, and praying together at the expansive grounds of the center.