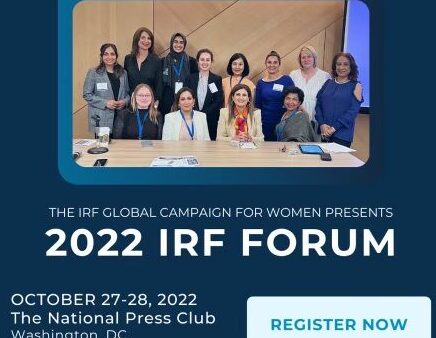 Anila Ali and Shirin Taber are unlikely allies as a Pakistani-Iranian duo. Together with their networks, they are hosting a leadership forum to advance religious freedom for Iran, Pakistan and the Middle East. The inclusive training will be facilitated by an international delegation of women leaders and media producers at the National Press Club, October 27-28. The women-led initiative is a direct outcome of United Nations and State Department declarations to promote pluralism and gender equality. Empower Women Media intends to host a follow-up event in the MENA region.

Shirin Taber, executive director of Empower Women Media and IRF Forum’s facilitator, states, “While there is great work underway for religious freedom worldwide, the Middle East has high rates of religious-based violence. Women and minorities suffer the most. The situation on the ground shows a strong need for an action plan involving multi-faith solutions.” The IRF Forum will offer a film festival, practical tools, and strategy workshops to share the merits of religious freedom in Muslim societies. Our vision is to develop an allied network, highlighting women advocates, media and tech to build social movements for religious freedom.

Shirin’s Iranian-American family fled Tehran during the 1979 Islamic Revolution. Her Iranian Muslim father and American Christian mother knew it would be too dangerous to live as a multi-faith family inside Iran’s Islamic republic. Today, Shirin shares how her father gave her the enduring gift of religious freedom. “My Dad allowed me to make my own faith decisions. He didn’t force me to practice his faith as he did.”  Today, Shirin equips women as religious freedom media advocates, hosts an annual women’s film festival and produces online courses highlighting the role of religious freedom in building thriving societies.

“Many organizations already do a great job documenting and publicizing the tragic cases of religious persecution around the world,” says Anila Ali, President and Co-Founder of American Muslim and Multi-Faith Women’s Empowerment Council (AMMWEC). “While many conferences acknowledge these human rights violations, we focus on drawing attention to what is not being talked about enough — the many positive benefits of religious freedom in Muslim-majority societies. That’s why we’re proud that AMMWEC is one of the organizations sponsoring this important forum”. Anila’s award-winning short film, Without Fear, illustrates how Muslim women thrive in religiously free societies, and will be screened at the forum.

For the IRF Forum, advocates and stakeholders will meet for a 2-day training event at the National Press Club. Participants will come away equipped with a tool kit of options to help advance gender equality and religious freedom in the Middle East and beyond.